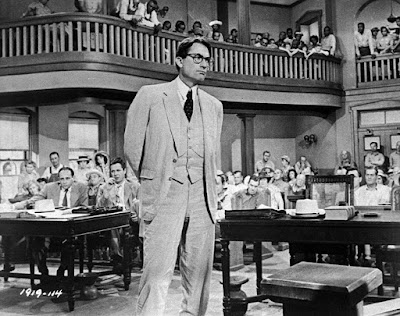 Gregory Peck as Atticus Finch, defender, in To Kill a Mockingbird

Michael Barrett, Director of the Missouri State Public Defender (MSPD) office, recently exercised his authority to “delegate the legal representation of any person to any member of the state bar of Missouri” to appoint Governor Jay Nixon to represent an indigent defendant facing incarceration and in need of representation.

What led Barrett to take such a step?

In Barrett’s letter to the Governor, he cited the Governor’s repeated cutting of public defender funding, which has led to a severe reduction of staff. Missouri’s indigent defense system ranks 49th in the United States. The Governor:

3. Claimed the reduction in revenues led to fiscal discipline yet didn’t reduce his own budget.

Barrett continued “This action comes even after the Civil Rights Division of the Department of Justice found that poor black children are being systematically deprived of their rights in Missouri due…to the lack of public defenders.”

Will Governor Nixon accept the appointment?

Probably not, but time spent in crowded court room with its organized chaos might make him more aware of the needs of the poor who deserve competent counsel for their defense. Maybe he would then be willing to take the 6th and 14th amendments more seriously and find some funding to help solve the problem.

Do you have an appeal?
Let's find out!

Law Firm May Collect Unpaid Fees Based On Contract Provision

Plaintiff’s Fraud Did Not Necessitate ROPA Judgment Being Vacated

The trial court in this disputed parentage case properly held that,...
Read More

Get every new blog conveniently emailed to you!